Winter White In the Hill Country 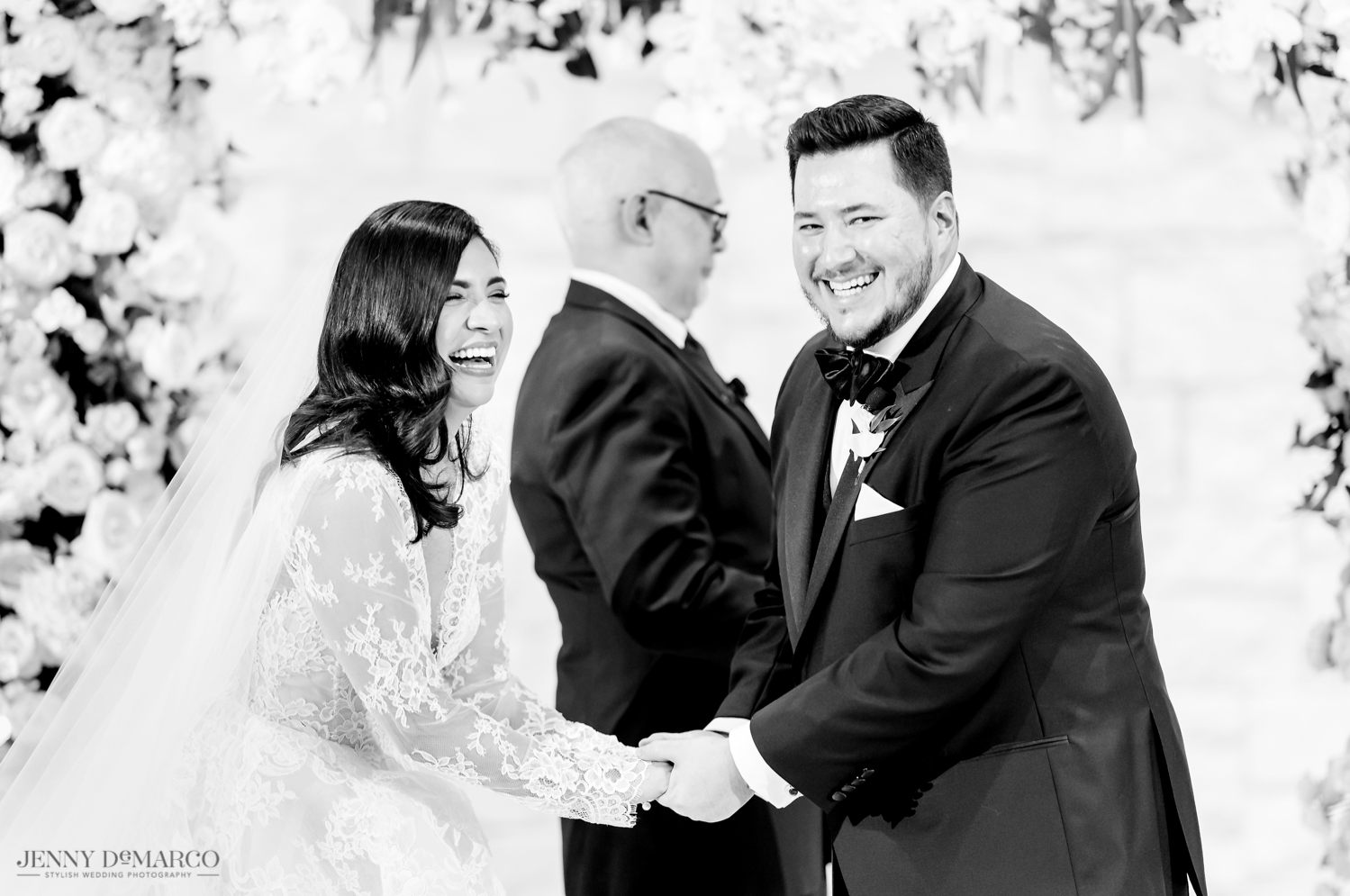 Q. What are your day jobs?

He is a Chief of Staff at the Texas Legislature and she is an attorney at Jackson Walker LLP.

Q. Where did you both grow up?

McAllen, Texas. But didn’t know each other even though it’s a relatively small town and our parents knew each other. Also went to rival high schools!

Q. How did you meet?

We worked in the same senate office at the Capitol. He had been working in that office for several years, it was her first job out of college. We got off to a rocky start! He swears he always liked her, she was convinced that he did not. We became friends slowly, after a few months of working together. At some point we became best friends. After over a year, she was getting ready to leave her job at the Capitol to start law school, and on her last day of work he let her know how he felt. The rest is history!

Q. Tell me about the proposal?

We were in New York City. We were in town to see Hamilton (my favorite!), and it was also my 5-year college reunion at Columbia. It was his first time in the city and I was so excited to show him around. My family – my mom, dad, sister, and brother – also made the trip with us. One evening, we all had plans to go to the top of the Rockefeller Center to see the view and have some drinks before going out to dinner. But he told me to be ready a few hours earlier and said that he and I were going someplace to have a drink before we met up with my family for our evening plans. We took a cab to Rockefeller Plaza and he led us to an unmarked building.

Once inside, we were led into an elevator and two guys took us up to the top floor – by this point, I knew something was up because everyone was acting really weird and he wouldn’t even look at me. When we got to the top, the elevator opened up to this beautiful private rooftop garden. It looked like something out of a movie (and as I later found out, it was quite literally out of a movie – lots of popular movies had been filmed there). Anyway, we had it all to ourselves. As we stepped out further, I noticed a solo violinist and a giant bouquet of roses and white lilies.

In the middle of bustling Midtown, we had this quiet, private, rooftop. It felt like we were the only two people in the city even though we were surrounded by skyscrapers, Rockefeller Center, St. Patrick’s Cathedral, and 5th avenue. He escorted me to the center of the garden, right up to this beautiful pond, and began to say words (what words, I couldn’t tell you). I just remember that I couldn’t stop smiling and crying.

He eventually dropped down to one knee and popped the question and opened the ring box. The ring box was upside down and the ring almost fell out (everything was going TOO perfect, so it was only fitting that something went a little wrong). I was saying yes even before I saw the ring.  We hugged and kissed and laughed, and when I turned around, I realized there was a photographer capturing every moment. A few minutes later, my family showed up and joined us in our celebration. We took pictures, listened to violin, laughed, and cried.

We then went up to the top of Rockefeller Center for dinner, and then went bar hopping around the city the rest of the night. It was a night I will remember forever!

Q. Any pets? Tell me about them!

Yes! We have an English Cream Goldendoodle named Moose and a black Mini Schnauzer named Bear. Bear is 3 and a half and Moose is 2 and a half. Bear is the protector. He is very small but very feisty. We think he thinks he’s a lion, or something big and scary. He loves to nap (his favorite spot is Larissa’s lap) and plays tug-o-war over socks and underwear with his brother Moose.

If Bear is the fighter, Moose is the lover. Moose has never met a stranger. He is the sweetest, friendliest, most loving dog. He loves chasing birds and squirrels and loves to play fetch and chew on sticks. He’s really goofy and not that coordinated, and he definitely thinks he is a lot smaller than he is – he’s 70 lbs but will sit on you as if he’s 10 lbs. He also likes to pick on Bear when he is feeling brave – in the winter, Bear wears little sweaters, and Moose will pick Bear up by his sweater and carry him around in his mouth.

A special thanks to the vendor team: